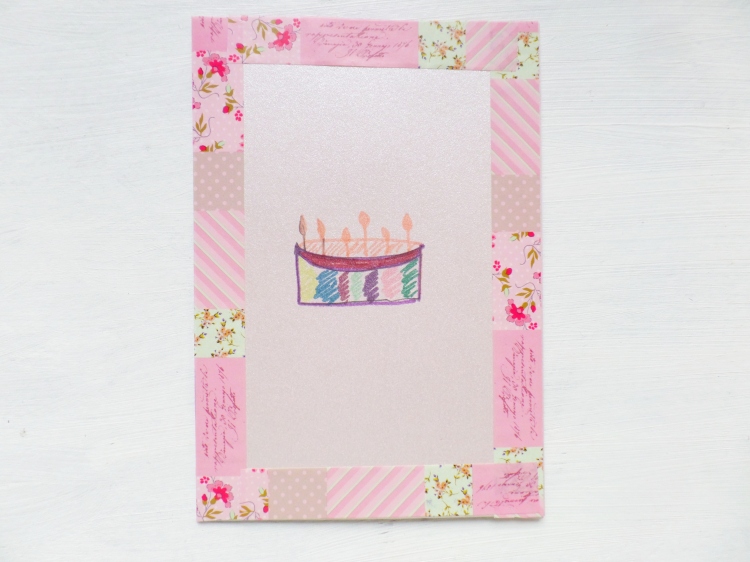 In my country, it is a tradition or social unspoken rule to treat your fellow colleagues with something for your birthday. In school/ preschool you usually brought a box of chocolates, but as you get a job and start to work in an office with a lot of people, it’s common to bring cakes and cookies, and sodas , or some prefer to take the team for drinks.

The invited colleagues chip in with money and buy you a gift, or they just put all the money in an envelope and give it to you.

I really like to treat people when it’s my birthday but I found this tradition to be really unpleasant  sometimes, even awkward,  and most of all, I always felt it like an obligation from both sides, with no feeling involved.

About 3 years ago, my birthday was approaching, and I woke up in the morning with this idea of doing things different.

It involved a lot of work, and it had good chances to go to failure, but once I get an idea into my head it really sticks and doesn’t leave me alone.

My birthday is on December 16th, which is pretty close to Christmas, so I created for each of my colleague a little present, that included a Christmas ornament, a Christmas postcard, and a small chocolate and candy. The ornament had attached to it, a rolled piece of paper with a motivational quote for the next year. Every package was unique and different. I put them all in a bag, Santa type, and let everyone pick his present.

As I was giving the presents, someone told me my face was really red, from the embarrassment. At the same time I felt really happy, especially when someone said it felt like that it was their birthday and not mine.

The next year I went even further with the birthday experiment.

I did bring cakes and cookies and soda, but I sent an email saying that I didn’t want any gifts, but a birthday card.

I brought some blank cards, stickers, felted colored pens, washi tape, and some printed characters from my favorite shows, so they can choose.

I made a box , with a crust, so the cards can be inserted inside, and let everybody express their creativity, even anonymous if they wanted.

I also made a raffle, sticking numbers to some candy, and let everyone pick a number. At the end of the day there were 3 winners, and I gave them some small toys or sweets.

Surprisingly, I received a lot of cards, and also a gift, even tho I said I didn’t want one, which was really sweet. The gift really came in handy, with fresh new acrylic paints, something that I use really frequently, and new brushes.

Some were really curious and wanted a glimpse on the cards, but I kept everything private, and took them home to read.

All I can say is that at some point I burst into tears, and I passed through them at least 3 times. It was such a surprise for me, to see how much soul each one had, how unique and creative.

90% of my colleagues signed themselves, but I will not show their names in the images bellow, to keep the privacy. Also I am mostly going to show the covers, and not the inside with the whole message, unless the assembly was created inside, and the cover left blank, which some preffered to do.

There is a big difference between the cards made by girls and the ones made by boys. The first category is more colorful, vibrant and heartwarming.

The second category is based more on creativity and  word puzzles.

Bellow I will just place them randomly. Where it is written in Romanian I will translate bellow the image. 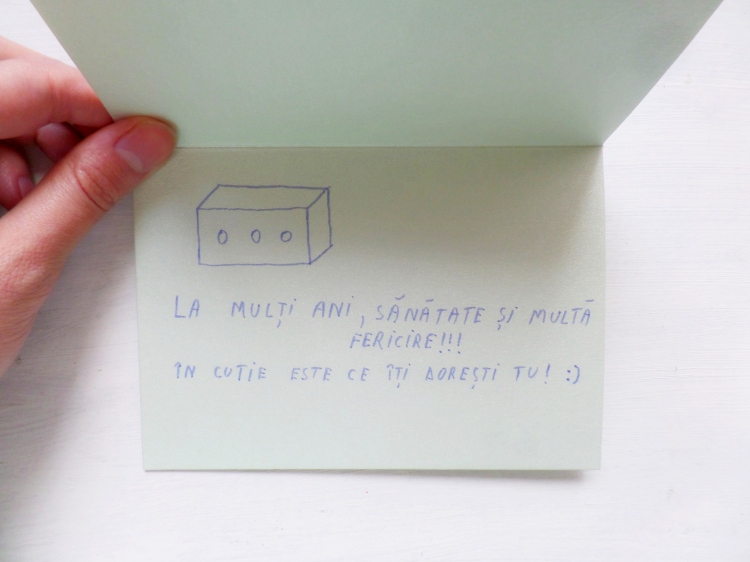 in the box is whatever you desire 🙂 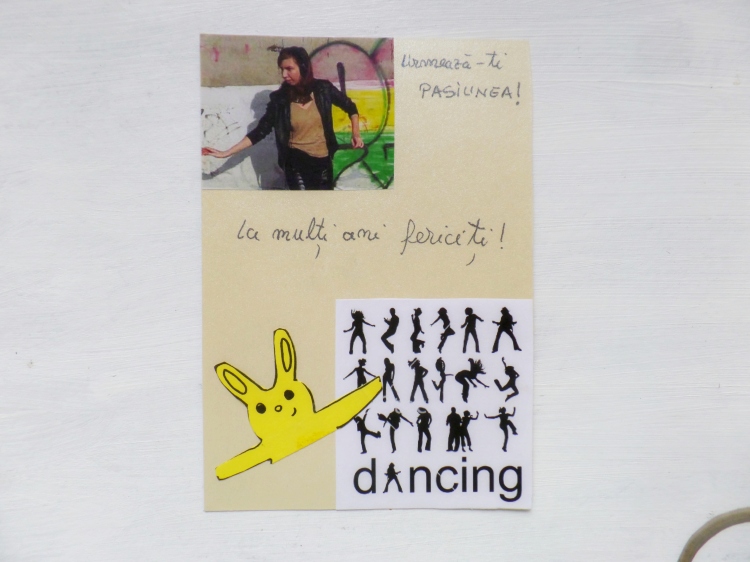 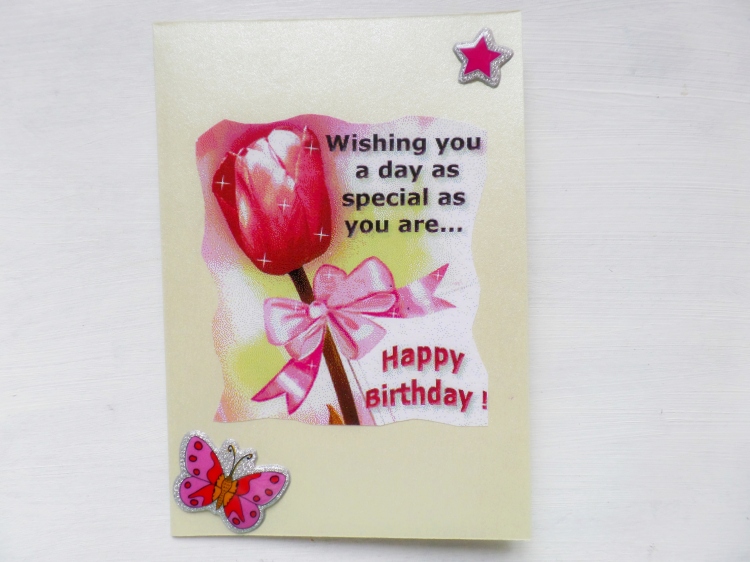 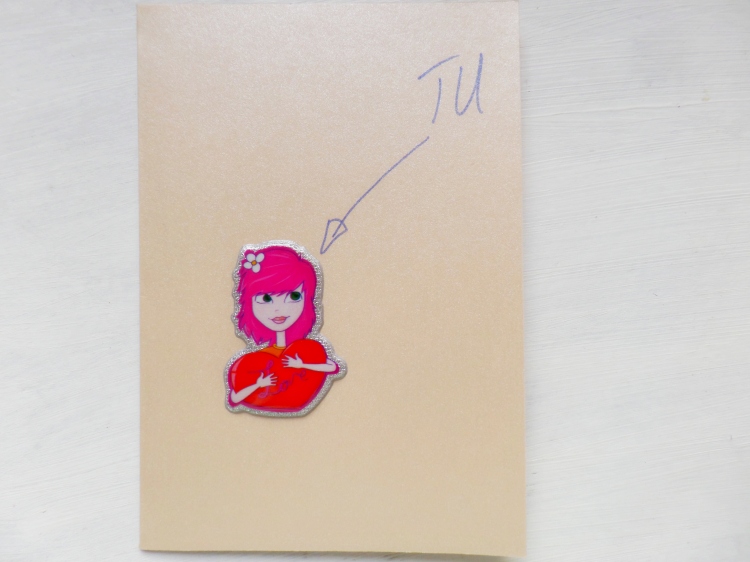 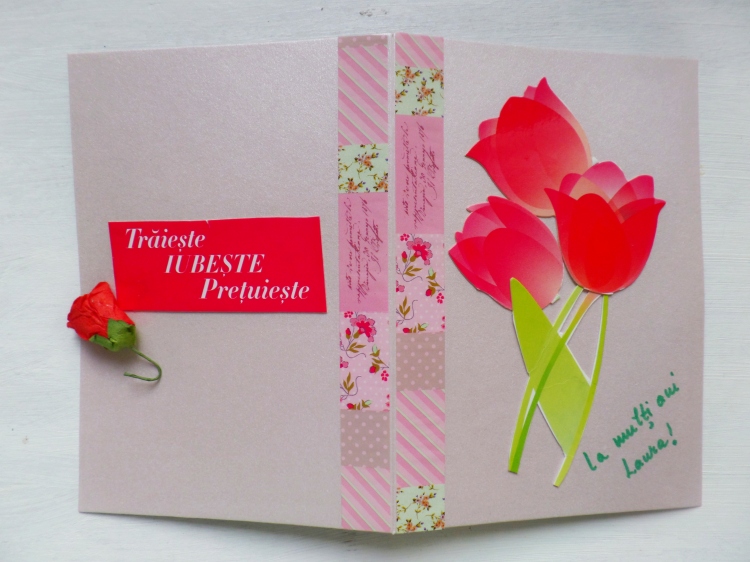 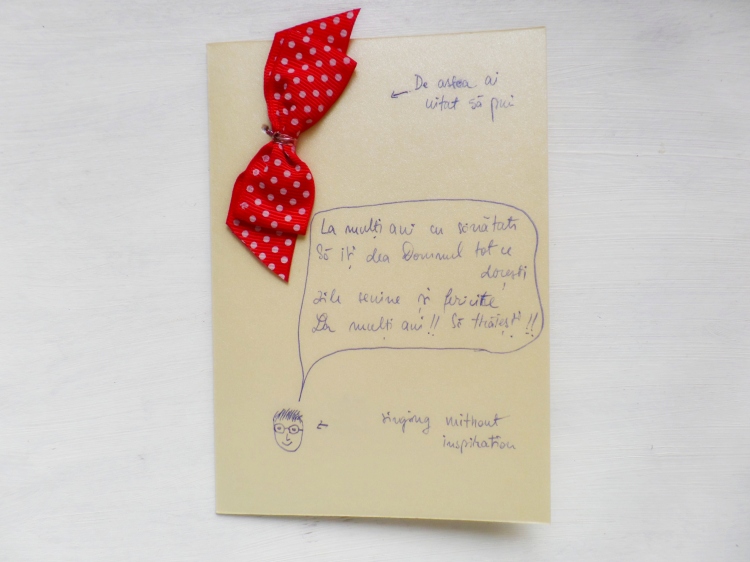 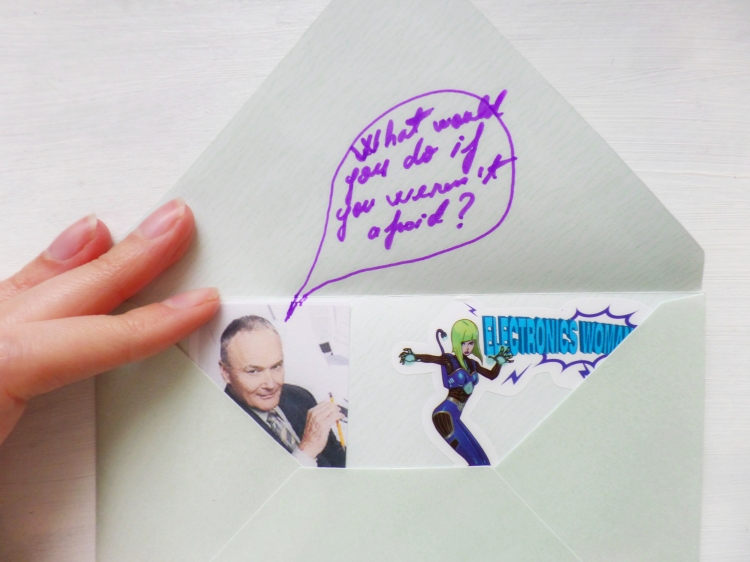 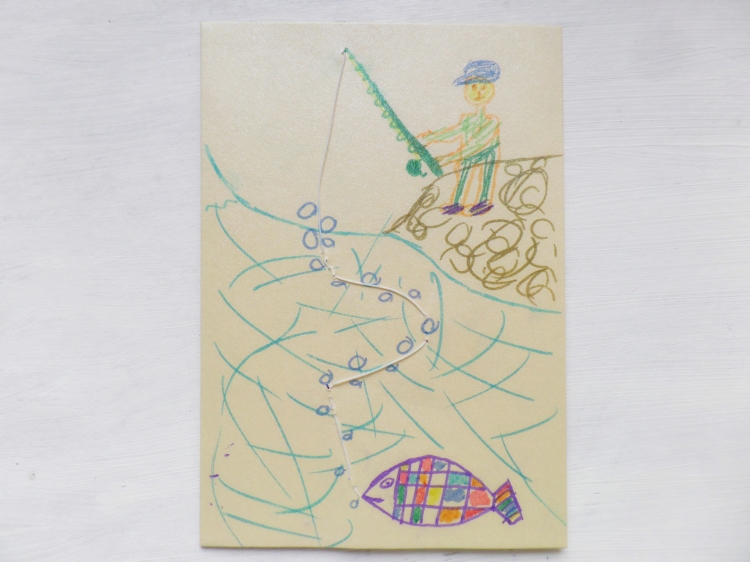 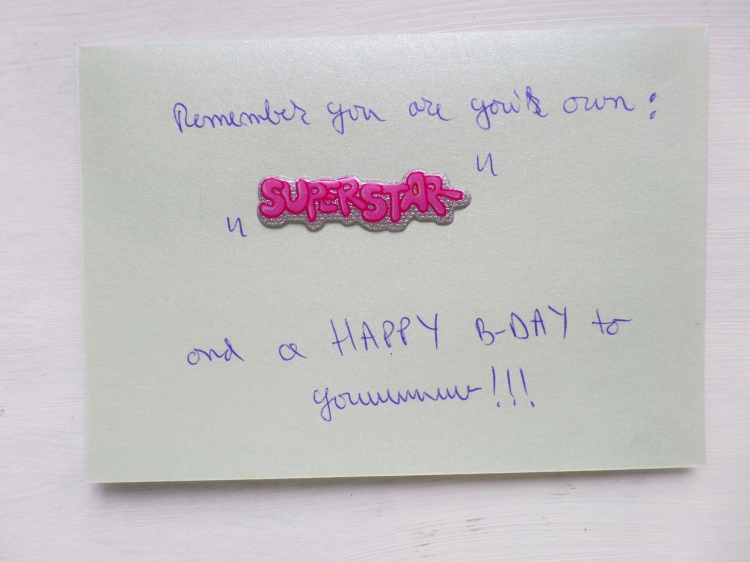 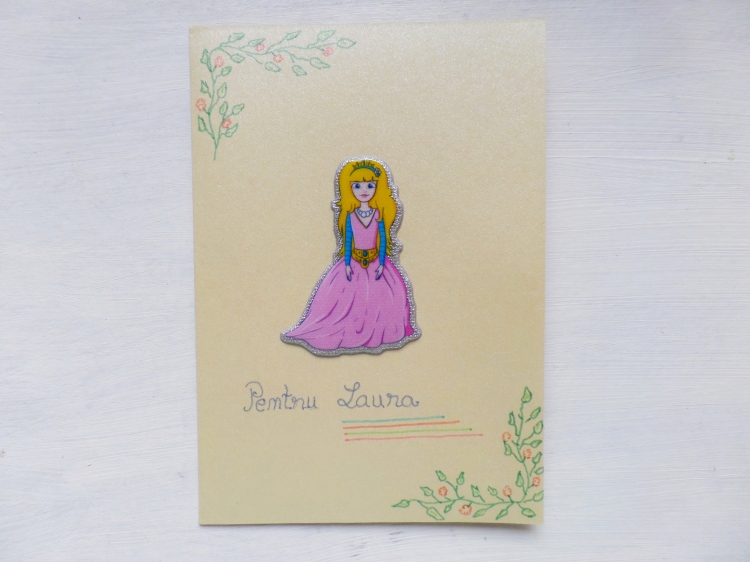 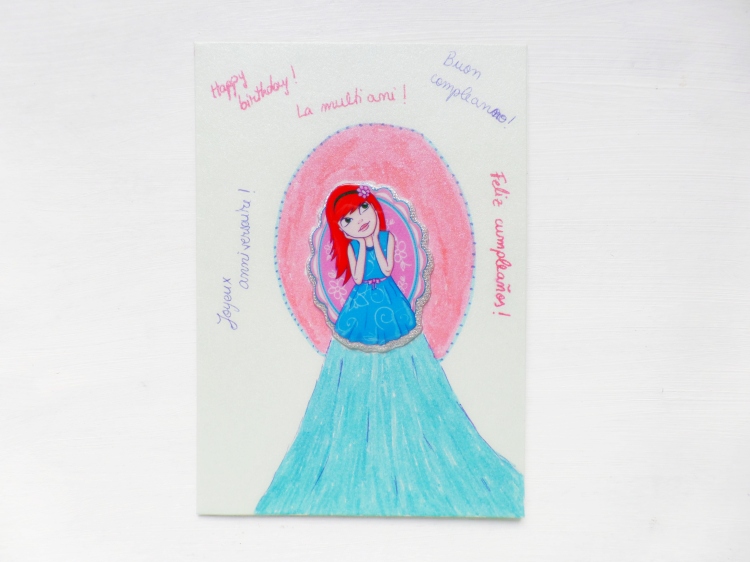 Most of my colleagues used the things that I brought to create the cards, but some made an extra effort to print out their own pictures or quotes, which was really sweet.

If you guys are reading this, thank you, thank you so much!

For my birthday last year, I was in a different company.

Here I repeated the inspirational quotes, and placed them on candy ( a sort of fortune cookie), and I also made homemade cakes.

I received as gift money in an envelope, and I donated it all to the animals right here.

This year I may take a break, or do it again to raise money for the animals. I must think about it.

Nevertheless, it was a great experiment, from which I’ve learned a lot.

Lots of love to you all!

Hi! my name is Laura and it’s so nice to meet you! On this website I share stories, passions and insights I gained after struggles. Some of my passions I’ve managed to materialize in the form of an online shop or YouTube Channel. So here they are: >at TreasureFriends you can find printable art and greeting cards, featuring funny and cute animal portraits on colorful backgrounds: https://www.etsy.com/shop/TreasureFriends >at EvergreensDesigns42 you can find printable botanical art and greeting cards, featuring painted flower arrangements or real pressed flowers and leaves: https://www.etsy.com/shop/evergreensdesigns42 >at SoulBrushing you can find original printable abstract art, using different techniques, and different types of paint: https://www.etsy.com/shop/SoulBrushing > Fluffy Hedgehog, a YouTube Channel with crafting tutorials on recycling, home decor, gift ideas and many more: https://www.youtube.com/channel/UCdFA1UHKhZPdCZ-ZwQZRTUw >MystiqueL, a Youtube Channel with dancing videos : https://www.youtube.com/user/MistiqueL >Ariciul Pufos, an online shop with handmade jewelry (only for Romanian customers ) : https://www.breslo.ro/AriciulPufos Thanks for visiting! You can contact me any time at l_dogariu@yahoo.com View more posts